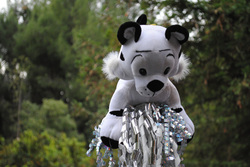 November 19th, 2011 was an eventful day for the members of Golden Valley High School's Key Club as they participated in the annual Key Club event known as Fall Rally. Held at Six Flags Magic Mountain in Valencia, California, a total of 41 divisions of the CalNevHa (California-Nevada-Hawaii) district arrived at the venue in the early hours of the day, ready to spread their Key Club spirit (some of them already showcasing their spirit by practicing their cheers and engaging in Key-Club-renowned Spirit Battles).

When the gates of the amusement park opened at 10:30 in the morning, hundreds of spirited Key Clubbers filed in and enjoyed as much of the park as time allowed them. Different divisions were assigned certain time slots, each corresponding to the Spirit Rally they would be attending. As part of Division 16 White Tigers, GVHS's own Key Club attended theirs later on in the afternoon. Facing off against old foes such as the Division 3 Sharkies and the Division 25 West Puffer Fish, D16 participated in Cheer Battles as well as auctions for Lieutenant Governors and Executive Officers. All proceeds from the auction (as well as those from ticket sales) were donated to the Pediatric Trauma Prevention (PTP) program. D16 gave their all and cheered as loud as they could, landing them a spot in the Top 5 Semi-Finalists, competing for the big prize, the famous Key Club Spirit Stick, awarded to the most spirited division among each rally session's attendees.

"Fall Rally was fun, being my second and last Fall Rally, it will be one of the many highlights in my senior year. GV will lead D16 again next year I'm sure," Marc Morada, Divisional Spirit Commissioner, says. And many would agree. Fall Rally was indeed a fun experience, and memories made from participating in this event will be forever treasured. So, next year's GV Key Clubbers, be at your ready for another round of intense cheering, meeting new and spirited people from other divisions, and overall having a good time.